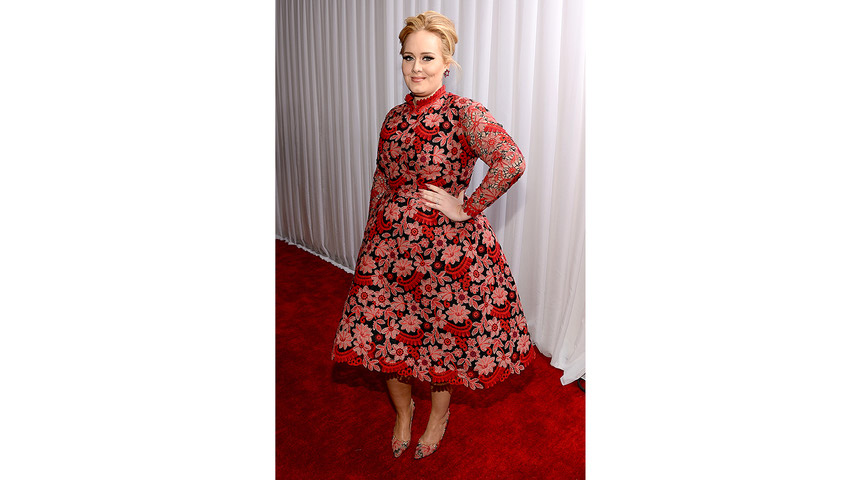 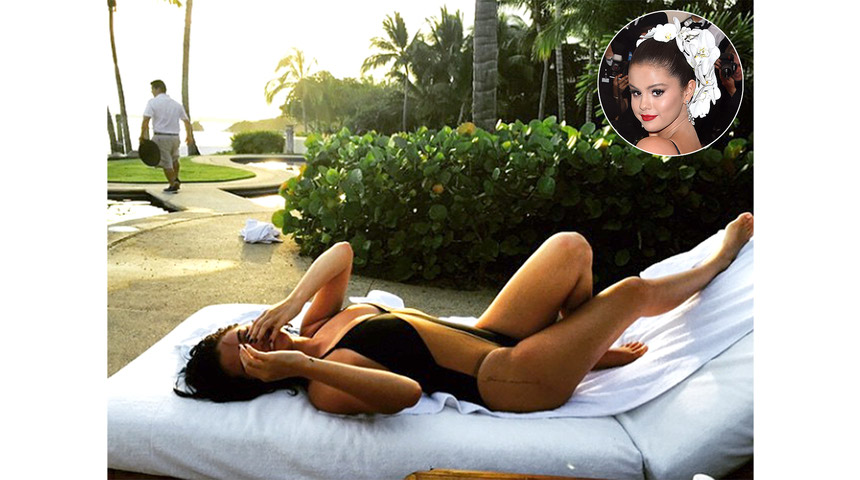 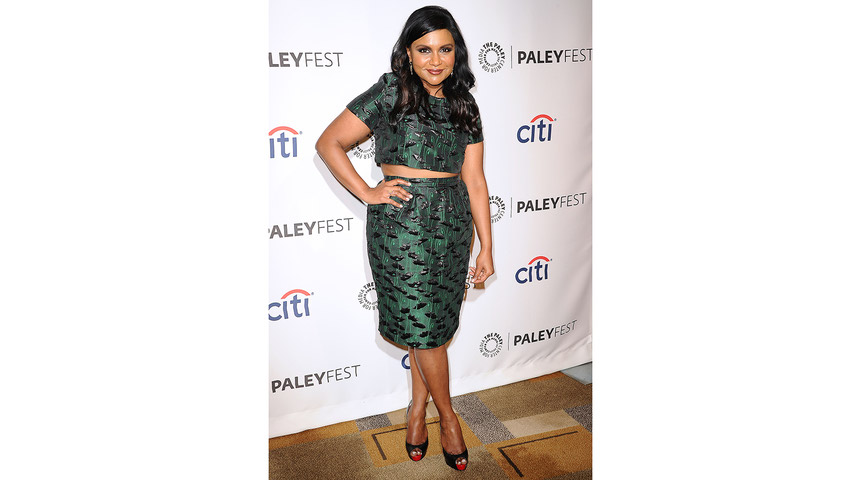 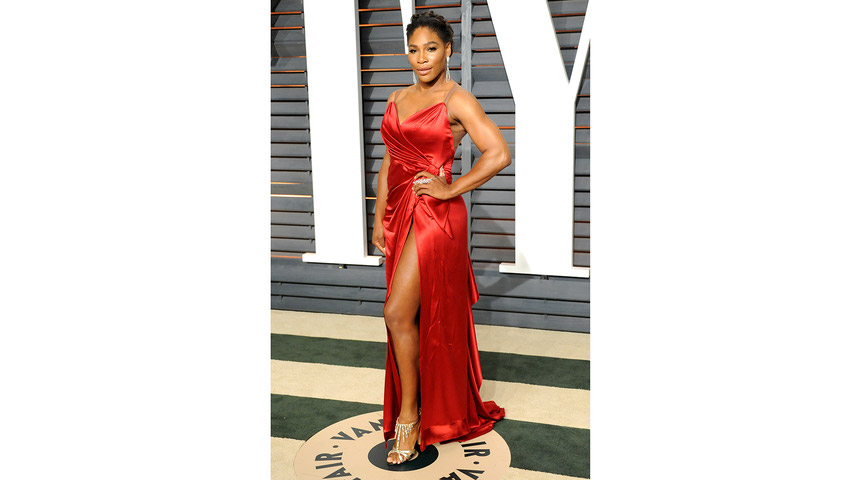 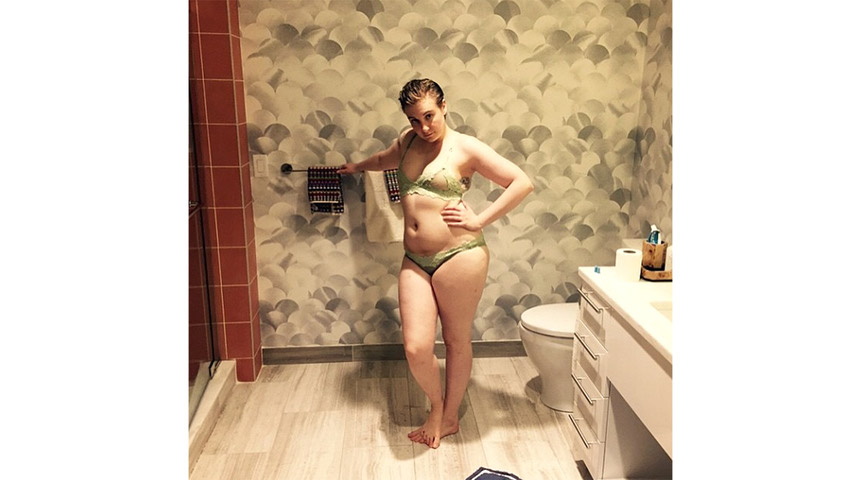 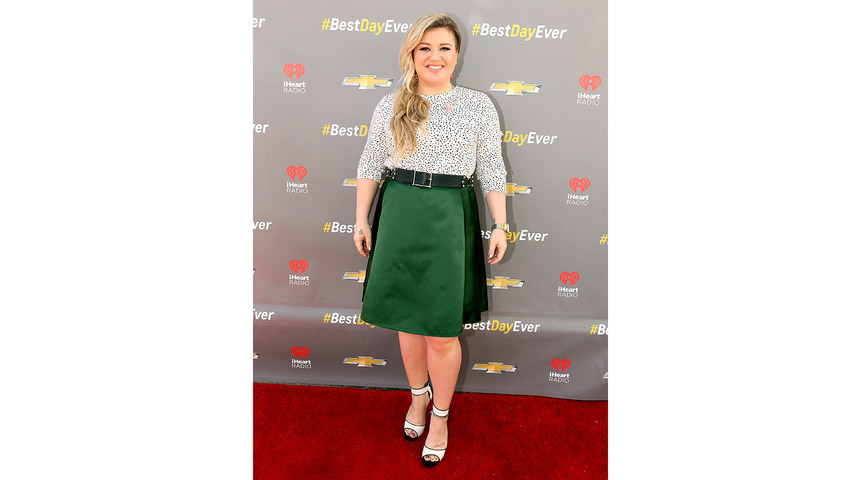 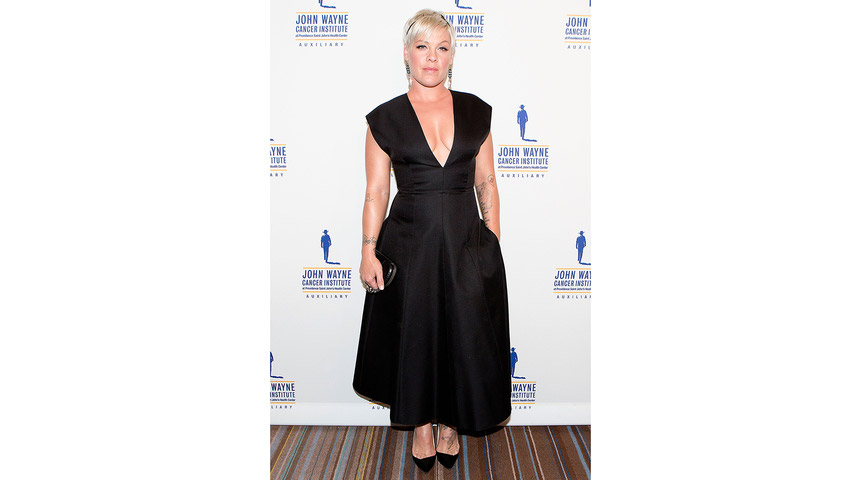 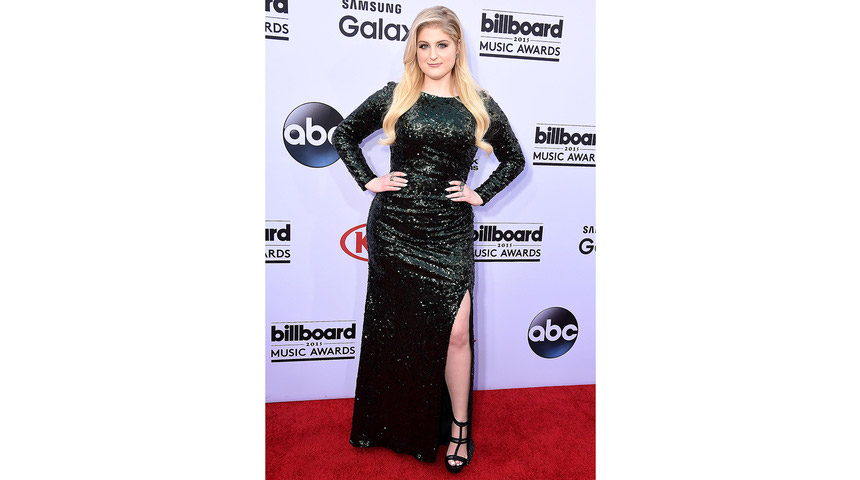 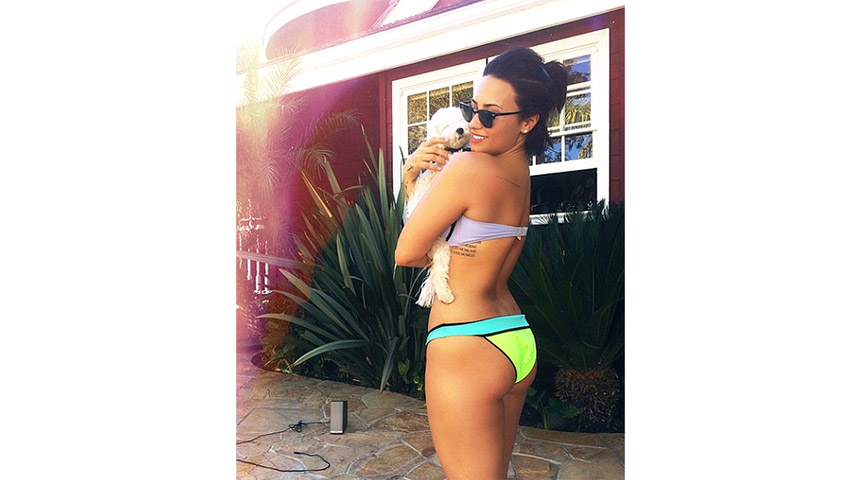 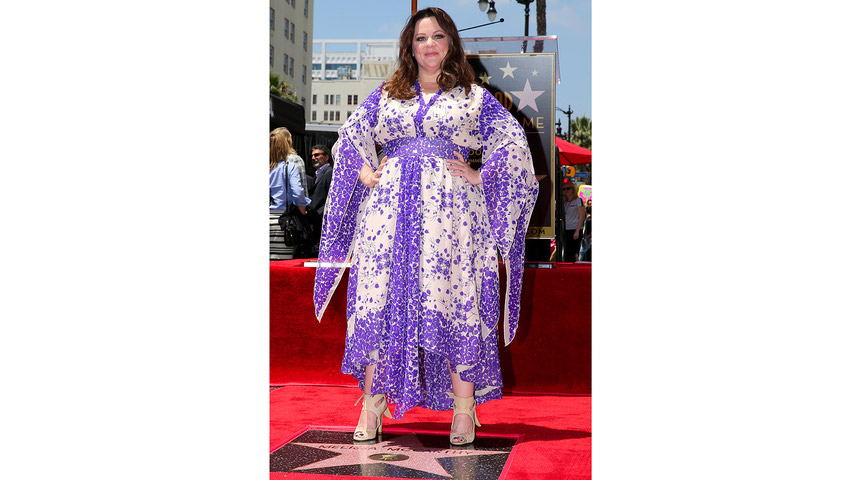 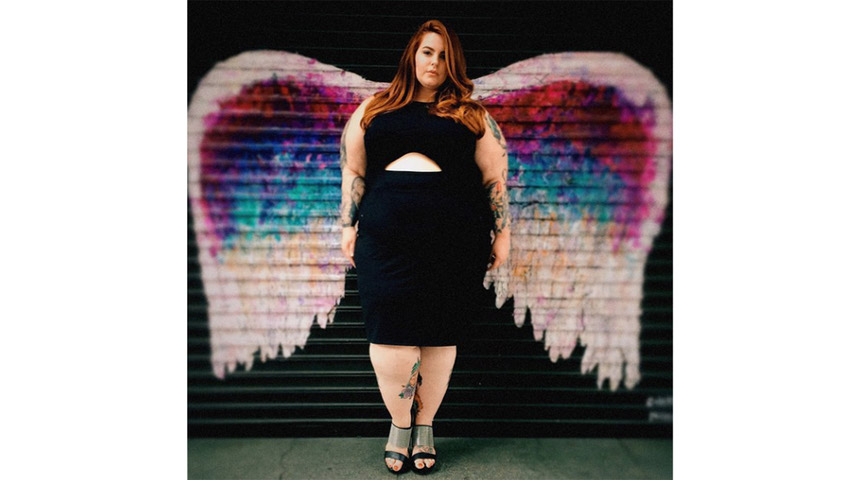 After being declared “a little too fat,” by Chanel designer Karl Lagerfeld, ten-time Grammy Award winner Adele told Anderson Cooper on 60 Minutes that she is okay with who she is. “I’ve never seen magazine covers and music videos and been like, ‘I need to look like that to be a success.’ I don’t want to be some skinny Minnie with my tits out. I really don’t want to do it and I don’t want people confusing what it is that I am about.”

After super-skinny starlet Selena Gomez added some swerve to her curves and was attacked by Internet trolls for her fuller figure, she hit back in the best way possible: by posting a gorgeous photo of herself on Instagram in a sexy swimsuit with the caption “I love being happy with me yall #theresmoretolove.”

Though Mindy Kaling works out and tries to maintain a healthy lifestyle, she doesn’t dream about having a model body and is okay with being a “fluctuating size 10.” “There's a whole list of things I would probably change about myself. For example, I’m always trying to lose 15 pounds,” Kaling told Vogue. “I never need to be skinny. I don’t want to be skinny. I’m constantly in a state of self-improvement, but I don’t beat myself up over it.”

Serena Williams’ gorgeous, muscular body may be splashed across the pages of fashion magazines and shown off on the tennis court in skimpy outfits, but the champion recently admitted to DuJour that she wasn’t always so comfortable in her own skin. “My sister Venus was so tall and slim, and just being in a society where a lot of people are really thin, it was hard. Especially as an athlete,” she said. “No athlete has boobs like me. I had to learn how to embrace myself and embrace my curves. And that’s something a lot of people can relate to. That’s why I tell people that even at 25 or 26, it’s OK if you’re feeling uncomfortable with yourself. I was, too. It’s normal. I love who I am, and I encourage other people to love and embrace who they are. But it definitely wasn’t easy—it took me a while.”

There’s no denying it: Lena Dunham is one of the most body-confident stars in Hollywood. Though the Girls creator may not have a model body (she has even called herself a “fat girl”) and struggled with body image issues in the past, she isn’t afraid to strip down to lingerie, like in this Instagram image, or get completely naked in front of the camera on her hit show. “I feel good with my size now,” she told People in 2014. “I know when I say that, people are like, ‘mmm-hmm,’ but I just do! It used to be when I went into a room with all the thin women, I felt like, what’s wrong with me? Now I just feel special.”

Kelly Clarkson, whose fluctuating weight over the years has sparked criticism, doesn’t define herself by whatever clothing size she’s wearing at the moment. “It’s like, you’re just who you are. We are who we are. Whatever size, and it doesn’t meant that we’re gonna be that forever,” she said on The Ellen DeGeneres Show in 2015. “That’s the thing. Sometimes we’re more fit. Like especially me, I’m such a creative person that I yo-yo. So sometimes I’m more fit and I get into kickboxing hard-core. And then sometimes I don’t, and I’m like … I’d rather have wine.”

Pink, who faced body backlash on social media after attending the John Wayne 30th Annual Odyssey Ball in Beverly Hills, turned to Twitter to let the world know that she is happy with her body. “I can see that some of you are concerned about me from your comments about my weight,” she responded. “While I admit that that dress didn’t photograph as well as it did in my kitchen, I will also admit that I felt very pretty. In fact, I feel beautiful. So, my good and concerned peoples, please don’t worry about me. I’m not worried about me. And I’m not worried about you, either. I am perfectly fine, perfectly happy, and my healthy, voluptuous and crazy strong body is having some much deserved time off. Thanks for your concern. Love, cheesecake.”

Meghan Trainor’s hit song “All About That Bass” and its accompanying body-positive video has transformed the curvy star into a role model around the world. “There is a study in the States that found the number of girls who hate their bodies has doubled,” she told the Daily Mail’s You magazine. “My three-minute song has helped a lot of people. It’s shocking that it only took a three-minute song. One father came up to me after a show and said, ‘You saved my daughter’s life.’ It’s incredible, it’s crazy.”

Demi Lovato, who has been open about her struggles with eating disorders and body image issues, and has publicly battled fat-shamers on social media, promotes a healthy message to her fans. “Regardless of what society tells you these days … You don’t have to have a thigh gap to be beautiful,” she recently captioned a bikini photo on Instagram. “It is possible to love your body the way it is. #fitness #health #acceptance #selflove.”

Melissa McCarthy, who is launching a clothing line in August for sizes 4 to 28, recently revealed to MORE magazine that it’s difficult for women of her size to find clothes and how insulting it is that plus-size women are often ostracized by the placement of their departments in stores. “People don’t stop at size 12. I feel like there’s a big thing missing where you can’t dress to your mood above a certain number,” she said. “It’s an odd thing that you can’t go shopping with your friends because your store is upstairs hidden by the tire section. We’ll put you gals over there because we don’t want to see you, and you probably don’t want to be seen.”

Plus-size supermodel Tess Holliday, who recently was featured on the cover of People, created the hashtag #effyourbeautystandards in order to help other women feel comfortable in their own skin. “It’s become a movement. Millions of women have joined me, letting me know that they now feel good about how they look and are free to wear what they like,” she told the magazine. “I get the most unbelievable letters and emails from women every day. They are so honest and heartfelt. They tell me how my being willing to be out there and tackle the unrealistic notions that our society has of beauty has changed their lives—sometimes has saved their lives. It is daunting. But I see myself in all of them.”

Not every star in Hollywood is a size 0. And while the entertainment industry is notorious for promoting unrealistic standards when it comes to body image, some female celebrities are breaking the mold by proving to the world that beauty comes in all shapes and sizes. After being ostracized by Internet trolls and nasty bloggers about their bodies, Selena Gomez, Demi Lovato and Pink used social media to promote a positive message to women, while Melissa McCarthy took action and filled a void in the plus-size market by starting her own clothing line, and Meghan Trainor scored Grammy gold and helped girls all over the world love their curves with her hit song “All About That Bass.” Lena Dunham and Mindy Kaling fought against Hollywood’s method of typecasting, using their non-traditional beauty, brains and outspoken natures to become powerful and successful leading ladies, while Adele and Serena Williams have not only scored multiple awards for their talents, but also landed coveted Vogue covers without fitting into sample sizes. See the women who are challenging Hollywood’s body image standards and get inspired with their words, because let’s face it: Most of us will never fit into a size 0.