America's Top Restaurant Chains Get An "F" in Antibiotic Use

If this new report doesn't make you take the phrase “Watch what you eat” more seriously, we don't know what will. A collection of consumer and health groups released a report today showing that most of America’s fast food (or casual restaurant) chains serve antibiotic-infused meats. Furthermore, most of these restaurants don’t have a policy or plan to cut antibiotic use.

Out of the top 25 restaurant chains in America graded in the "Chain Reaction" report only two received A’s—Chipotle and Panera. Among those receiving F’s included Applebee’s, Arby’s, Burger King, Denny’s, Domino’s, Jack in the Box, and more. 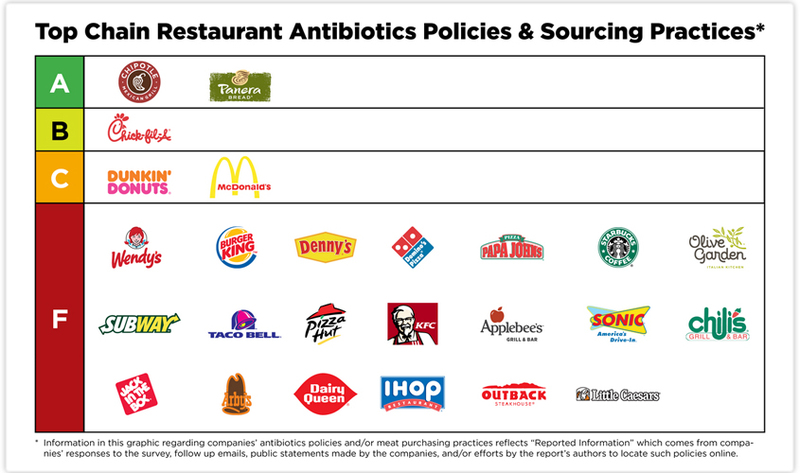 Antibiotics are fed to farm animals to prevent them from getting sick (a lot of the times due to living in unsanitary environments) but with this comes repercussions. “Overusing antibiotics in meat production helps to create drug-resistant superbugs. Our nation’s largest chain restaurants can be part of the problem, or part of the solution,” said David Wallinga, MD, Senior Health Officer with the Natural Resources Defense Council (NRDC) in a news release.

In 2013, the CDC reported that an estimated two million Americans contract antibiotic-resistant infections, with 23,000 dying annually—underscoring the need for antibiotic regulation policies in the U.S.

Chipotle and Panera were the only two restaurant chains that serve the majority of their meat from animals without the routine use of antibiotics. Chick-fil-A (B grade) and McDonald's (C grade) have established polices to limit regular use of antibiotics in their chicken with a timeline in place.

To avoid antibiotics in meat, you can search your favorite restaurant’s website for more information or speak with a manager. Another option is to cook your own meal. Meat supply companies like Foster Farms and Tyson Foods have plans in place to eliminate the everyday use of antibiotics on its animals. Organic raw chicken is also usually available for purchase at grocery stores. Doing some background checking and or cooking your own meat may mean more work, but could be a boon to your health in the long run.