Could This Be the Highest-Calorie-Burning Workout Class?

It’s 6:30 p.m. on Monday and celebrity trainer Jason Walsh transforms a bright, sunny room into a dark nightclub—if nightclubs were full of exercise equipment. “Here we go,” he says calmly, marking the start of a grinding 30-minute, full-body workout.

A full spectrum of neon lights shines from the ceiling, illuminating the large, darkened room while heart-pounding dance music reverberates all around. We stand roughly a foot above the ground on VersaClimbers: towering exercise machines that simulate climbing. VersaClimbers were trendy in the early 1980s—most notably the workout machine of choice for Paul Newman's infamous bod—but soon became an afterthought. Walsh, who trained Matt Damon for soon-to-be-released "The Martian" and now "Bourne 5", along with Bradley Cooper, Jessica Biel and Justin Timberlake, might have finally made them cool.

The VersaClimber is a great conditioning tool that reinforces proper movement patterns. It’s been used for a long time and is more efficient than most mainstream exercise equipment, says Walsh. “People just didn’t know how to utilize it and make it as exciting as the treadmill, rowers, all those kinds of things. It’s just hard. It’s just really demanding.” Walsh is the owner and founder of Rise Nation, a boutique climbing studio in West Hollywood, Calif. It’s one of the first VersaClimber-based group workouts ever developed and has also become increasingly popular for those living in La-La Land. (Even if you don't live in Los Angeles, you may be able to find a VersaClimber near you. Contact your local fitness centers or studios to see if they carry one, or you can even buy one from the manufacturer and climb at home.)

Using the VersaClimber requires a vertical, cross-crawling movement, which gives you a full-body workout. Throughout the exercise, you’re simultaneously utilizing your arms, back, legs and core muscles. One arm pushes up a handle as the other arm pulls another handle down; your feet alternate pushing down on pedals (similar to a StairMaster). The Rise Nation class has participants engaging in this constant climbing motion with spurts of quick, high-intensity, shorter-stride intervals throughout.

Rise Nation students ascend anywhere from 2,000 to 5,000 feet during the 30-minute time frame. To put this in perspective, climbing 2,000 feet is the equivalent of scaling the Eiffel Tower twice; 5,000 feet is like going up to the very tip of the Empire State Building four times.

According to a recent article in Men’s Health, Walsh’s 30-minute Rise Nation course has participants burning more calories at a significantly higher rate than other well-known fitness classes. The magazine conducted a blind study comparing Rise Nation with other fitness studios including SoulCycle, Mile High Run Club and RowZone. The results of the study showed that a workout performed by a 6-foot-2-inch, 185-pound male burned 22.3 calories per minute using the VersaClimber compared to 13.3, 13.3 and 13.8 calories per minute, respectively, for the other three classes. Rise Nation also showed the second highest amount of calories burned post-workout (80), just trailing a 60-minute Mile High Run Club class. 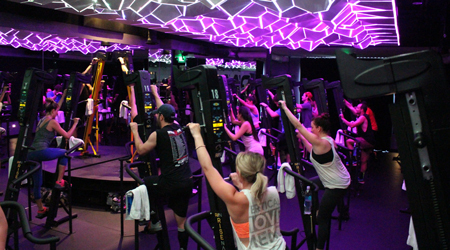 “When you incorporate the upper body and lower body at the same time, there’s a higher oxygen demand. You get more muscles burning,” Walsh explains. “Some people might get frustrated because it’s a little more demanding than anything else out there, but you will get better. Your body will get more efficient with the movement. You won’t be as cognitive and tense because you know what’s coming, and there’s a lot of room for progressing.”

To give you that rush to climb as high as possible, Walsh relies on the streaming neon lights and nightclub-like vibe: “I’m a big music lover. That feeling when you go to a really good show that evokes emotion—it has a profound effect on how you feel. It was done for a reason. The music gets your juices going.” The song selection helps your body create the tempo to perform the movements correctly and really feel the burn. “You’re doing a lot of work in a short amount of time,” Walsh says. “We don’t waste time. We move. You warm up for one or two songs and then it’s off to the races.”

It’s 6:59 p.m. on that same Monday. As the final song hits its last crescendo, 30 climbers attempt to go all-out for the remaining seconds. When the song ends at 7:00 p.m., Walsh turns the night back into day.