How to Clear Your Home of Toxin Congestion

Hollywood’s elite has long been concerned with raising awareness about global environmental issues. Now they’re getting involved in green matters that hit much closer to home: the toxicity of our indoor living spaces. Gwyneth Paltrow’s blog post, “The Dirty on Getting Clean,” went viral, and Jessica Alba started The Honest Company in the hopes of creating a less toxic world for her daughters. And these celebrities are onto something.

Take home fragrances. It may smell like springtime, but that synthetic product could lead to headaches or even arthritis. Many common home fragrances are known to contain ingredients such as phthalates that have been shown to increase the growth of breast cancer. Toxic chemicals in other commonly used cleaning, food storage and home-improvement products have been linked to a variety of illnesses, infertility and miscarriages—and manufacturers are not even required to specifically list these ingredients (you can find them on the label as “artificial fragrance” or “perfume”). One study showed that the polluted outdoor air in Times Square was 16 times cleaner than that of the average American home.Most of spend more than half our time at home. But in an effort to make our domestic spaces pleasant places to be, are we actually causing ourselves harm?

Take these five simple steps to make your home healthier: 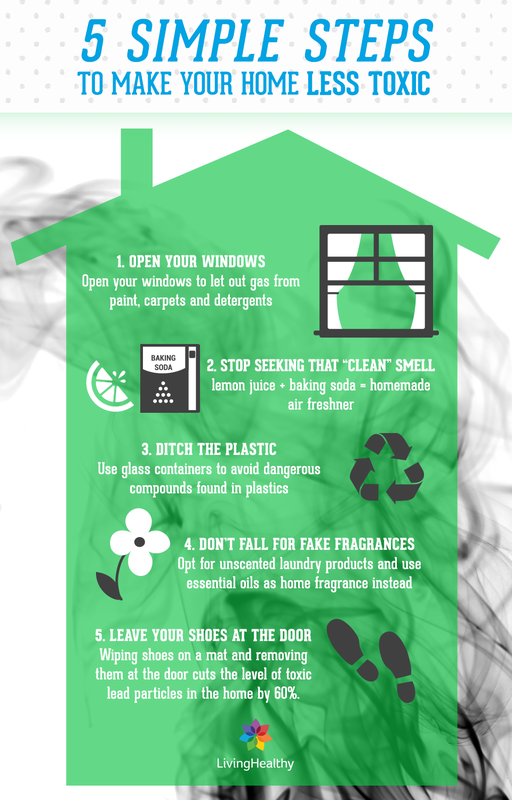 PBDEs, or polybrominated diphenyl ethers—which are often added as flame retardants to furniture, electronics and other products—are increasingly found in human blood, breast milk and tissues and linked to many neurocognitive problems in children such as disrupted brain development, lower IQs and hyperactivity. These and other chemicals such as toluene and formaldehyde used in paints, flooring adhesives, carpeting, soaps and detergents release “off-gas” into our home environment. Let them out by simply opening your doors and windows as frequently as possible.

According to CANCERactive, a British cancer awareness site, tests show the homes of stay-at-home women contain 40% more toxins than those of women who work outside the home. EPA statistics show that women working at home have a 55% increased risk of cancer over those who work away from home. Presumably, stay-at-home women use more commercial cleaning products and home fragrances. To avoid toxic chemicals, make your own safe solutions:

a) Make your own air freshener by combining a teaspoon of lemon juice with a teaspoon of baking soda in a small dish to absorb household odors.

b) Neutralize kitchen odors by simmering 1 tablespoon of vinegar in 1 cup of water on the stove while you’re cooking. You can also add cinnamon or other aromatic spices for a warm scent.

c) After juicing citrus fruits, grind their rinds in the garbage disposal to clean and freshen it.

Just because it’s “BPA-free” doesn’t mean it’s safe—it’s likely the BPA was replaced with another compound just as dangerous. According to a study in the British Medical Journal, “…many synthetic chemicals (used in household plastics) have intrinsic hormonal activity—they are “endocrine disruptors”… environmental and lifestyle factors are key determinants of human disease—accounting for perhaps 75% of most cancers.” Simply use glass containers instead of plastic ones.

If it’s not a springtime meadow, it probably shouldn’t smell like one. Heard of phthalates?  Chemicals pervasive in air fresheners and scented dryer sheets, they can mimic the actions of the hormone estrogen, which in turn could increase women’s risk of breast cancer and children’s risk of premature puberty. Opt for unscented laundry products and use essential oils as home fragrance instead.

5. Leave your shoes at the door.

Pretend you’re European—or Hawaiian—and save the shoes for outside. Shoes can deposit lawn chemicals and pesticides into rugs and carpets, allowing them to accumulate over time. According to The Door Mat Study, wiping shoes on a mat and removing them at the door cuts the level of toxic lead particles in the home by 60%.