How to Protect Your Liver From Heavy Drinking: 5 Tips From a Rock Star Doc

It’s no secret that December 31 is the biggest binge-drinking night of the year, as people all over the world ring in the New Year with cocktails and champagne. While a night of heavy drinking by no means makes an individual an alcoholic, it should be noted that a recent study conducted by the University of Missouri revealed that there is in fact a connection between binge drinking—defined by the National Institute of Alcohol Abuse and Alcoholism as women consuming four or more alcoholic beverages in two hours and men having five or more drinks in two hours—and the risk for developing alcoholic liver disease (as well as a variety of other health problems). If you’re anticipating a night of heavy drinking this New Year’s Eve, there are precautions you can take to protect your liver and minimize potential damage.

Binge drinking can damage the liver’s cells and monopolize all its enzymes, which decreases the liver’s ability to clean other toxins, says New York City-based naturopathic doctor Gabrielle Francis, ND, who has spent most of her career touring around the world and helping everyone from The Rolling Stones and Aerosmith to Bruce Springsteen repair, recover and refuel from their rock-and-roll lifestyles. “The toxins stay in the blood as free radicals and cause damage to healthy cells of the body,” she explains. “Binge drinking causes dehydration and stress on the kidneys as well.”

Whether you’re a rock god or a mere mortal, your liver will take a hit if you decide to drink the night away this New Year’s Eve. That’s why LivingHealthy turned to Francis, author of The ROCKSTAR Remedy, for her advice on how to prep your body for all the partying. 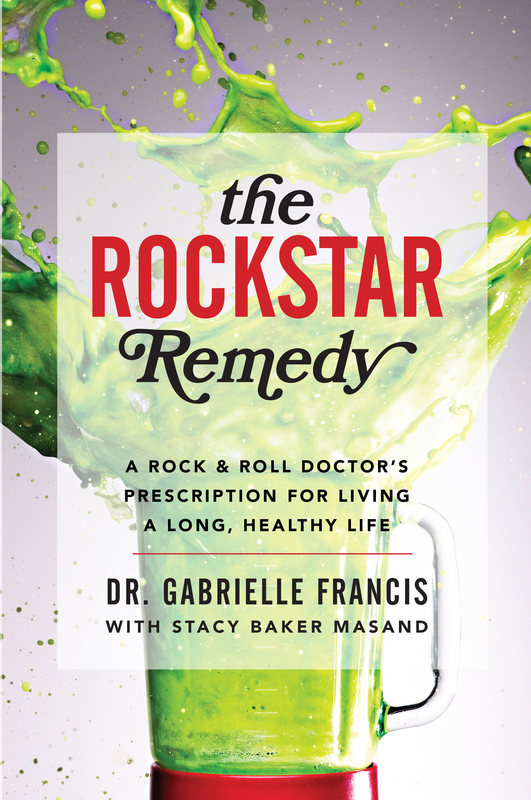 THE DAY BEFORE heavy drinking, nourish your body with good food: Francis suggests lean and clean protein (such as organic chicken, fish and meat), vitamin-rich green veggies, rice to protect the gut lining, yogurt for probiotics, dark-skinned berries for antioxidants, cruciferous veggies for sulfur (which supports liver detox), her RxStar Detox Shake (see below for recipe), 64 ounces of water and electrolytes, such as coconut water or EmergenC.

THE DAY OF heavy drinking, eat even healthier food: Drink an RxStar Detox Shake in the morning and pay extra attention to eating protein and veggies before you start drinking. Drink tons of water while you’re consuming alcohol.

THE DAY AFTER drinking, make sure to stay nourished: Drink another RxStar Detox Shake and make sure to eat a warm breakfast such as oatmeal, quinoa cereal or rice cereal. Drink antioxidant-rich green tea as well, which “helps clear the toxins of drinking while the caffeine helps to clear water retention,” says Francis. Throughout the day, make sure to follow the eating guidelines of the last two days.

THE DAY BEFORE, THE DAY OF AND THE DAY AFTER drinking, sip on liver protection teas/herbs: Francis suggests loading up on dandelion, burdock, stinging nettles, ginger, milk thistle and gentian herbal teas, in addition to green tea.

AVOID certain foods: Stay away from sugar, hydrogenated fats, food additives and coloring, excess caffeine (no more than two caffeinated drinks a day), anti-inflammatory drugs and NSAIDS, excess gluten, cow’s milk other than organic yogurt and cheese, and foods that are deep-fried. “These foods are either toxins that inhibit the ability of the liver to detox—like the drugs or meds—or they are allergenic and add more burden to the liver,” Francis explains. Slowing down the body’s booze detoxification also makes the alcohol “more toxic and harmful,” she warns.

- 2 teaspoons intestinal repair powder (“GI repair formulas help to rebuild the gut mucosa,” she explains. The liver dumps its toxins in the intestines and it’s important that they’re healthy “so the toxins don’t end up back in the bloodstream.”)

- 1 scoop greens powder (“The chlorophyll in green foods helps to chelate toxins and heavy metals from the cells and brings them to the blood where they’re then filtered through the liver and gut.”)

- ½ teaspoon probiotic powder (Probiotics are “the beneficial bacteria that line the digestive tract and help with detox.”)

- 1 scoop fiber powder (“Fiber clears the sludge off the walls of the intestines and moves it to the exit,” Francis adds. “It also helps to absorb toxins.”)

Blend all ingredients with 12 to 16 ounces of purified water. Drink it in no less than 30 minutes (as a meal replacement).