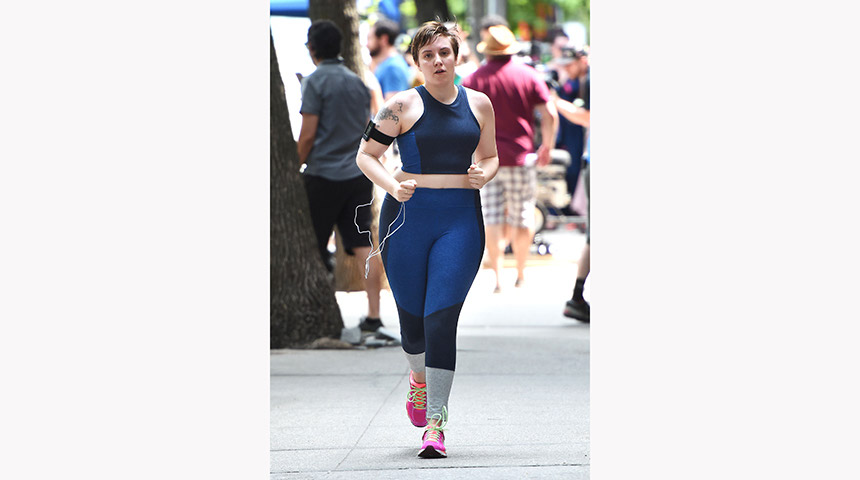 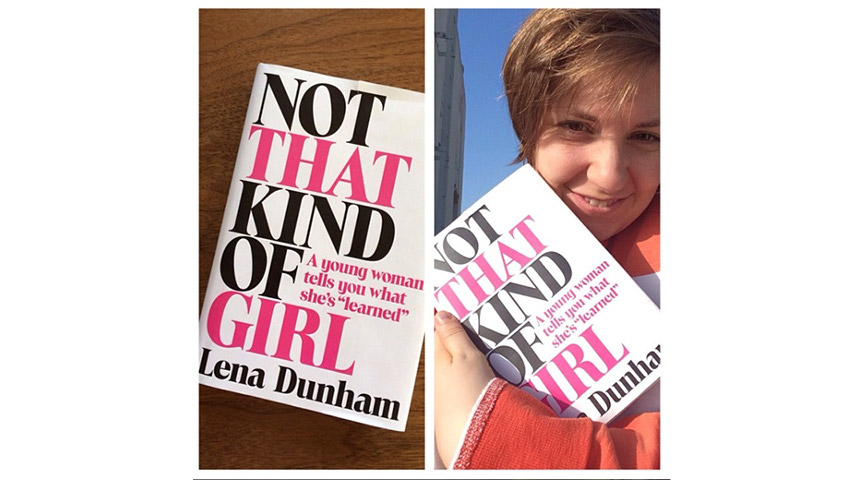 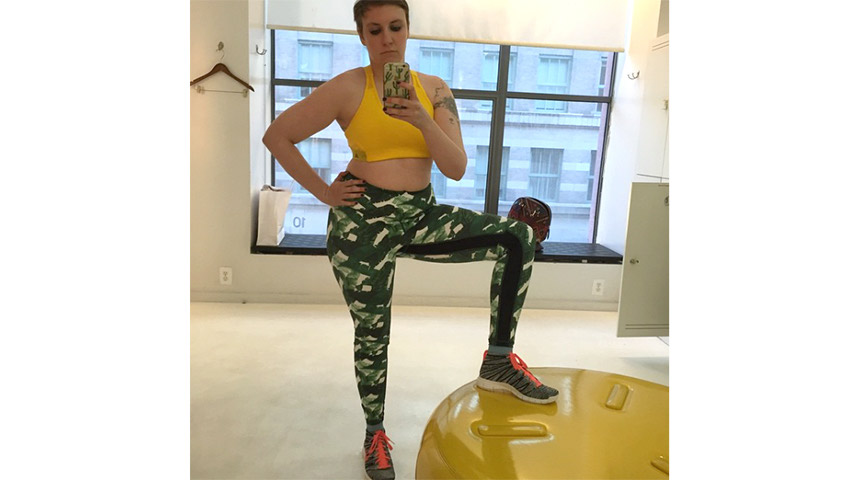 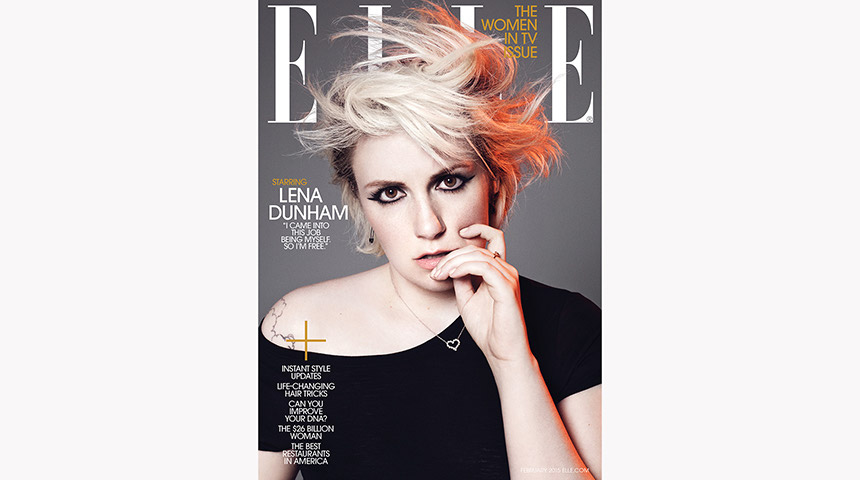 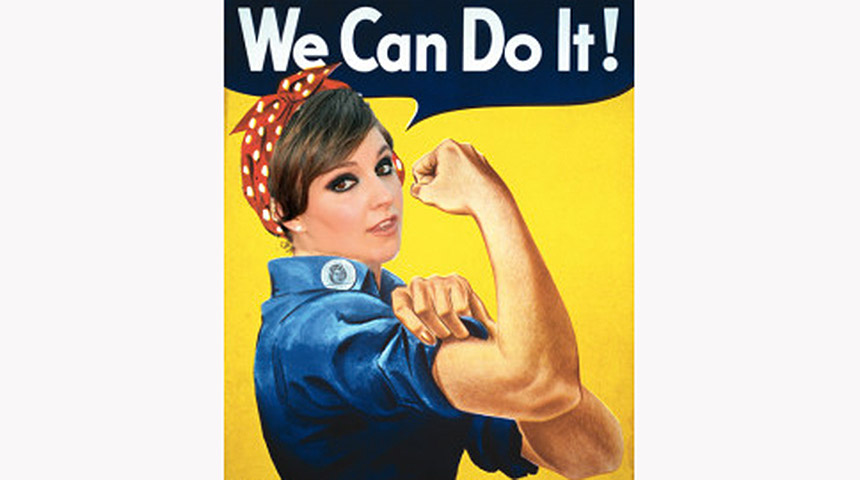 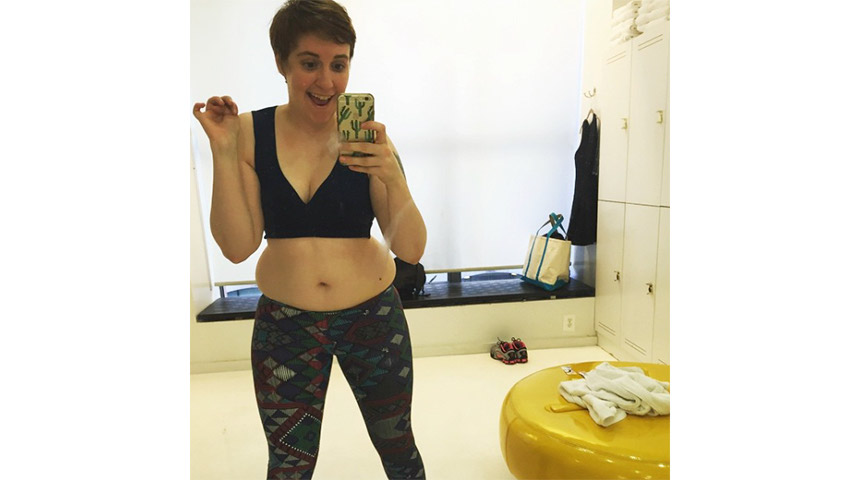 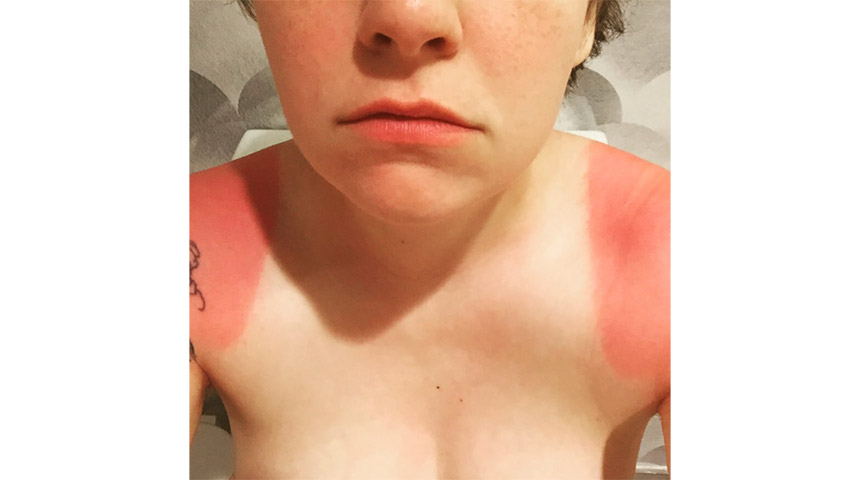 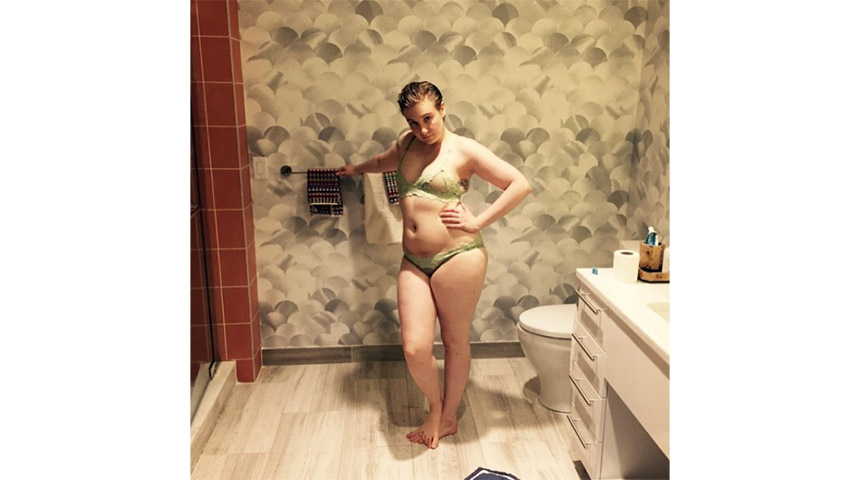 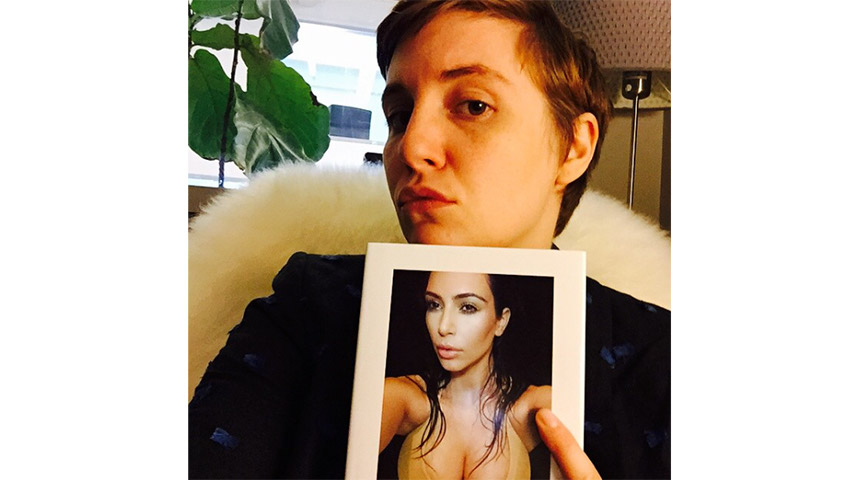 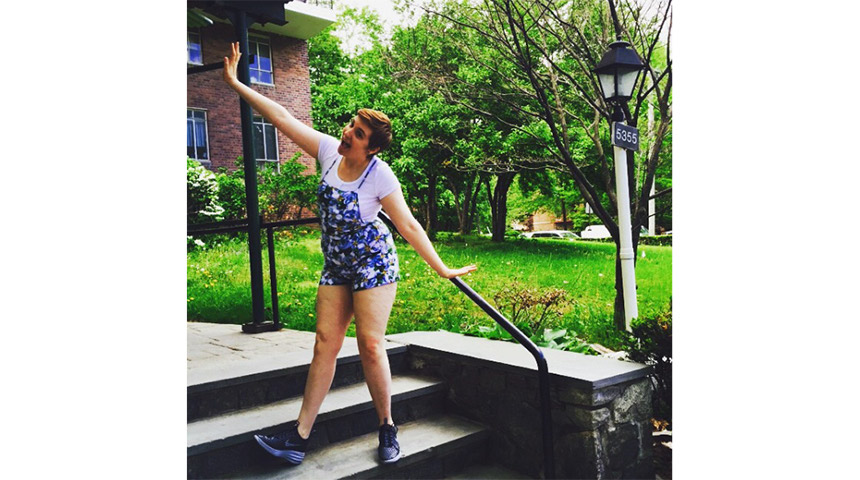 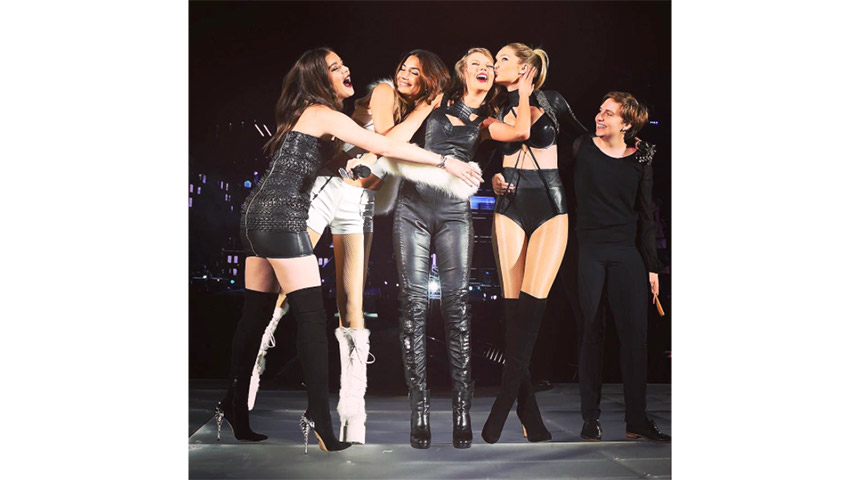 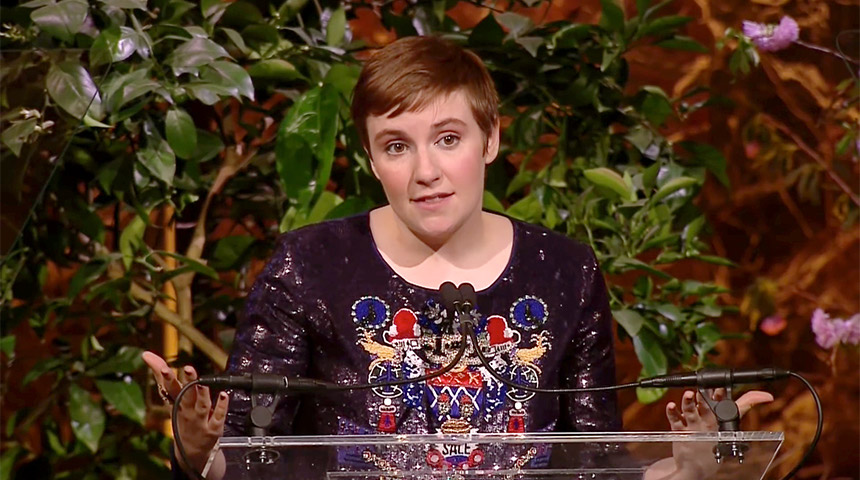 Conquer your fears and try something new. You may be shocked with the result:

Maybe you think you hate yoga or cycling, or perhaps you would rather drop dead than join your pals on the dance floor, but leave your ego aside and, like Nike once shouted out, Just Do It! In July, Dunham garnered attention when she proudly shared this professionally snapped photo on Instagram. “Not usually one to post a paparazzi shot but this fills me with pride. Basically my whole life I have hated running and run like a wounded baby Pterodactyl. It was embarrassing and honestly I did not trust myself to escape a burning building or even move briskly towards a buffet,” she explained. After Girls director Jenni Konner decided that “as Hannah evolved, so would her run,” and got Dunham a training session with Matt Wilpers from Mile High Run Club, Dunham admitted her own viewpoint changed: “Within an hour I had a different relationship to this formerly torturous activity. I felt strong, swift and proud. I'm not about to embrace that triathlon life but it's a true joy to continue getting more connected to my body and its powers.”

It’s okay to like things. Even if you know they aren’t “politically correct”:

Whether your guilty pleasure jam is Real Housewives, 50 Shades of Grey, hanging out with bad boys or playing with freakishly physiqued dolls, it’s totally fine according to Dunham. Just keep a level head and know what’s what. “Barbie’s disfigured. It’s fine to play with her just as long as you keep that in mind,” she explains, blasting the opinions of feminists around the globe in her bestselling autobiography Not That Kind of Girl.

It’s okay to be honest about your mental health or anything else you are dealing with. Especially if your experiences can help someone else:

Instead of keeping her personal issues under wraps like most celebrities do, Dunham recently opened up to her Instagram followers about how exercise has been a helpful tool in combating her mental-health issues. “Promised myself I would not let exercise be the first thing to go by the wayside when I got busy with Girls Season 5 and here is why: it has helped with my anxiety in ways I never dreamed possible,” she wrote. “To those struggling with anxiety, OCD, depression: I know it's mad annoying when people tell you to exercise, and it took me about 16 medicated years to listen. I'm glad I did. It ain't about the ass, it's about the brain.” Bravely honest and heartfelt, who knows how many people she’s helped with one social media post?

Find your greater purpose in life:

While some Hollywood stars bemoan or abuse fame, Dunham has used hers to make the world a better place. “I realized early on that I was not going to be able to have a comfortable relationship with celebrity if I didn’t feel like I was using it to talk about things that were important to me,” she explained to Elle. “It was always going to make me feel gross, for lack of a better word. I was like, ‘Oh, this attention is something I’m going to figure out how to use in a way that feels productive, healthy, and smart. And not just like as an excuse to collect handbags.’ Although... I love handbags.”

Feminism doesn’t have to mean smelly, hairy armpits and man-bashing:

Dunham is a new kind of feminist in Hollywood—one who doesn’t abide by traditional stereotypes. “My version of feminism is at its most basic level. It's about equality. I think that so many women have been misinformed about what feminism means. They think it means growing out your armpit hair, burning your bras and storming through the streets with a skewer ready to get men,” she explained to NPR’s Fresh Air. “What it actually means is you believe in human rights and women should be fairly compensated for the jobs that they do and that they should be [offered] the same opportunities and they shouldn't be discriminated against or hurt because of their gender. There are more women than there has ever been before and each one is unique and there's a lot of ways to express your femaleness. And we can't limit each other in that department; all we can do is support each other. So what I love about feminism is that it seems like an irrefutable concept, which is equality, caring for each other, supporting each other, looking out for each other and being strong in the face of a lot of societal factors that are telling us to sit down and shut up.”

Get your ass to the gym! No excuses:

You don’t need a perfectly fitting, expensive gym ensemble to get a good workout in, Dunham reminds us with this hilariously candid Instagram post: "Late to @tracyandersonmethod and forgot my workout clothes so had to snag a size large bra and size small pants (wrong in myriad ways.) But do we soldier on? Yes, yes we do because we want to be a strong & happy lady #largebrasmallpantscantlose.” True dat.

Always wear sun block. Actually, stay out of the sun in general:

Dunham wants everyone to know she doesn’t support tanning. “Feel the burn (FYI this is what happens to me when I stand outside for 10 minutes I do not support sun worship or even going outdoors really),” she candidly captioned this Instagram image of her awful burn lines.

Just because Lena isn’t a size zero doesn’t mean she’s afraid of flaunting her curves in racy, lacy lingerie! “Love my @lonelylingerie and I think I will wear it to dinner with some boots & a smile because we are all very lucky to be free,” she proclaimed on Instagram over Memorial Day weekend.

Kim Kardashian has more to offer than just tips on makeup application or how to take selfies:

Lena isn’t too proud to admit she’s a fan of the reality star icon, as well as her contributions to… feminism? “Selfie with selfish #yeahiboughtit,” she told her Instagram fans, adding, “I support experiments in female identity exploration/am a student of pop culture/will not be shamed.”

Don’t hate your haters. Or even try to understand them. Just keep doing your thing:

Lena does not support the old adage, “If you can’t beat them, join them.” In fact, when it comes to her adversaries, she just brushes their criticisms off her shoulders and keeps dancing her dance. “People have always been trying to pick on me! Always!” she told The Daily Beast about her haters. “But I try not to be that self-pitying. I’ve tried to analyze it, but then I kind of realized that it’s not my job to understand, and it almost wouldn’t be healthy for me to understand. The best thing I can do is be of service to other women and people who are experiencing similar things, and if I can be a guide to other outspoken, creative women, that’s the best thing I can do rather than try and understand the segment of the Internet that responds to me negatively.”

Standing next to supermodels is bad for anyone’s self-esteem:

After catwalking down the stage at Taylor Swift’s New Jersey 1989 concert with statuesque stunners Lily Aldridge, Gigi Hadid and Hailee Steinfeld, Dunham admitted at a Film Society event it didn’t exactly do wonders for her body image. “I was so thrilled to support my friend and so displeased to learn about the truth of my own height,” she told Judd Apatow. “I’ve been feeling pretty tall, feeling pretty sturdy and it was amazing to me, like, ‘Oh, I’m not tall, I’m chubby.’ It’s different. I mean, on most days, I feel really great and fine about my body, but I don’t think standing next to, like, three supermodels or so is anything even the most confident woman needs to do. The minute I caught sight of myself on the Jumbotron, I knew something was very wrong.” Lesson learned.

It is possible to recover from sexual assault:

Lena, who’s been open about being sexually assaulted in college, often speaks about how she’s healed from the experience and used it to make her a stronger person. “When I was raped I felt powerless. I felt my value had been determined by someone else. Someone who sent me the message that my body was not my own, and my choices were meaningless,” Lena explained on the stage of Variety’s Power of Women New York event. “It took years to recognize my personal worth was not tied to my assault; the voices telling me I deserved this were phantoms, they were liars. So as a feminist, as a sexual assault survivor, my ultimate goal is to use my experience, my platform, and yes, my privilege, to reverse stigma and give voice to other survivors.”

“I think that I may be the voice of my generation,” Hannah Horvath, Lena Dunham’s alter ego proudly states in the pivotal 2012 pilot episode of HBO’s Girls. “Or at least a voice… of a generation.”

Though some of us may have brushed her off three years ago (after all, Dunham was just reciting a script she wrote for a television show), the outspoken 29-year-old has since proven to the world she’s much more than just another Hollywood starlet desperate for fame, fortune and a size zero body. In fact, Dunham doesn’t want any of those things. She simply wants to change the world, be herself and redefine feminism.

Despite her stable of critics and haters, Dunham has kept the dialogue open, posting near-nude photos on social media, discussing her mental health issues and a sexual assault experience in college as well as sharing inspiring images of her body and her healthy-living journey. Diane Kruger, Taylor Swift and writer Ali Wentworth are just a few celebrities who have praised Dunham and deemed her a role model—and we couldn’t agree more. From conquering fears and dealing with haters, to being OK with playing with a physically “disfigured” Barbie, LivingHealthy has put together a slideshow of several inspirational life lessons to be learned from Lena.