Is Over-Cleanliness Plaguing Our Kids With Allergies?

You can never be too rich or too wise, but you certainly can be too clean. Scientists suspect that overzealous antibacterial behavior could explain why American children are experiencing an epidemic of autoimmune diseases such as allergies. Babies and toddlers instinctually put things in their mouth and we fear they may choke or poison themselves. But from an evolutionary perspective, when they are outside on clean dirt, tasting the earth, they are unwittingly developing their immune system.

Soil is nature’s stomach, “digesting” most of what it comes in contact with (dead plants, rocks and organisms) while producing a fertile growing environment and cleaning water.  Children growing up on farms have lower allergy and asthma rates compared to city dwellers, attributed to their regular exposure to the microorganisms present in farm soil. Everyone is interested in a healthy gut these days, with probiotic and prebiotic supplements lining store shelves. But our gut would naturally get a good start if we ate more dirt, thereby introducing its healthy microbiome (bacteria) into our body. 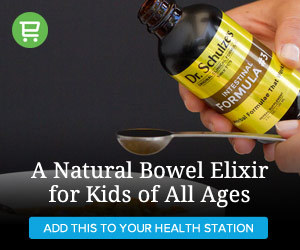 In some ways, kids have more protective immune systems than adults do. They have a higher number of white blood cells and are better able to respond to new infections. However, they lack a strong adaptive immune system, which develops slowly, with exposure to pathogens. A group from Johns Hopkins Children’s Center recently reconfirmed the “hygiene hypothesis,” a 1989 British study observing that larger families had fewer children with hay fever and allergies (due to the kids’ increased contact with dirt and disease from unhygienic older siblings). In 2014’s Urban Environment and Childhood Asthma study, researchers found that kids who are exposed to a dirty environment (such as cockroaches and mice), allergens and bacteria in their first 12 months of life are more effectively protected against future allergies and asthma.

The immune system’s primary role is to distinguish between good, bad and harmless. To work effectively, our immune system needs to be “primed” by exposure to a diverse range of organisms at an early age. If not exposed to a wide array of species, the immune system may mistakenly see a harmless pollen grain as something dangerous and trigger an allergic reaction. We also know that bacteria and fungi compete. Fungi are often associated with allergies, and it could be that a high diversity of bacteria keeps the fungi in check.

Earlier this year, The New England Journal of Medicine published a peanut allergy study that found that feeding young children food with peanuts from infancy (rather than avoiding such foods) markedly reduced peanut allergies when evaluating these children at age 5. Some in the peanut-feeding group still had the allergy later in life, but the study did not consider the environment of the baby; that is, the hygiene hypothesis was not part of this study.

Robynne Chutkan, MD, author of The Microbiome Solution, provides us with a road map for compensating for our “too clean” past (mothers and babies alike) through her “Live Dirty, Eat Clean!” lifestyle guide. Chutkan’s daughter was born through a typical Western medicine delivery, with drugs and a C-section. The hospital gave Chutkan’s baby antibiotics without her knowledge, “just in case.” After the delivery, Chutkan kept her baby very clean and protected, as most of us try to do. As a consequence, Chutkan says, “my daughter had more visits to the doctor before she was in preschool than I’ve had in my entire life.” And she doesn’t wonder why.

Chutkan’s dirt rehabilitation process starts with “rewilding.” We see this all the time when mankind first interferes with nature and then works to rebalance it. When we remove or abolish a species, other ones—sometimes beneficial and often times unexpectedly detrimental—flourish. But when we reintroduce the original species (if possible), the previous balance is often reestablished from natural predatory behaviors. The same thing happens in our digestive tract. When we do not develop a proper microbial biome, other (often harmful) species may proliferate either in the gut or elsewhere in response. In her medical practice, Chutkan demonstrates daily that rebalancing the microbiome often restores balance and good health, whatever the cause.

However, rewilding your own space may not be enough to eradicate all allergies and autoimmune diseases. According to ecologist David Suzuki, PhD, getting dirty in your area may not have the impact it once had. “When comparing allergies of adolescents living in houses surrounded by biodiverse natural areas to those living in landscapes of lawns and concrete, we find people surrounded by a greater diversity of life were themselves covered with a wider range of different kinds of microbes than those in less diverse surroundings,” he explains. “They were also less likely to exhibit allergies.”

The practical interpretation is that you need to bring your children to a real farm to get dirty in order to have the most impact. Suzuki’s solution? “We need to support conservation of natural areas and the diverse forms of life they contain, plant a variety of species in our yards, avoid antibacterial cleaning products and go outside in nature and get dirty—especially kids. Our lives and immune systems will be richer for it.”