How did she do it? Not how you think.

Not every celebrity starves herself and works out excessively to get back into her skinny jeans after having a baby. Just ask Stacy Keibler’s pilates trainer, Nonna Gleyzer, who worked closely with the star throughout her pregnancy and in the months after she gave birth to her daughter, Ava Grace.

“Stacy is one of the most active and health-conscious celebrities that I’ve ever worked with,” Gleyzer, a gymnast-turned-trainer who holds a BA in Physiology, says of her client. “She is constantly moving and maintains a really clean diet, which she diligently kept during her pregnancy.” 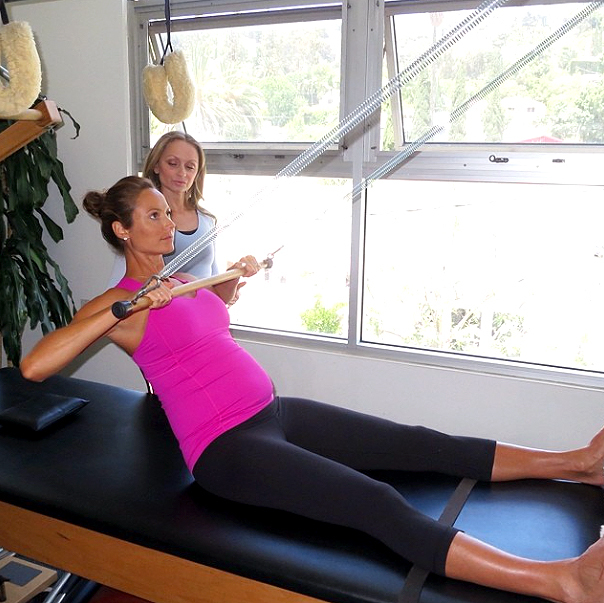 Gleyzer, whose private studio in Los Angeles has attracted Gisele Bundchen, Natalie Portman, Kerry Washington and Camila Alves to name a few, worked out with Keibler three to four times a week for the first six months of her pregnancy and once or twice a week towards the end. “We wanted to keep her core strong, so I had her doing a lot of lower abdominal work,” she says, emphasizing that they always used a ball to support her lower back. She also put a lot of focus on keeping Keibler’s arms “nice and strong, because that’s what people see on the red carpet.”

Keibler walked or hiked on the days she wasn’t training with Gleyzer, but her devotion to her clean diet was the secret to staying healthy and fit. “Stacy is really diligent when it comes to what she puts in her body. She is gluten and dairy-free and only eats organic,” Gleyzer says, noting that her client consumes a lot of greens, vegetables and fish. “While she was pregnant, she didn’t really have any cravings or consume any sugar other than fruit.”

One of Stacy’s favorite, energy-packed snacks? “Almonds soaked in water overnight,” Gleyzer reveals. “She got me hooked on them. They’re easy to digest and give you lots of energy.”

“When Stacy returned after giving birth, we really worked on building her stomach muscles back up, doing a lot of the same exercises we did before but also lots of obliques to retract her ribcage,” says Gleyzer. “We also started doing a lot of glutes and hamstrings, because those are what hold your bottom up, and continued doing a lot of arms.”

Though Stacy is still walking and hiking, Gleyzer says she isn’t doing any high-impact cardio because she is still nursing her daughter (“You don’t want to burn too much fat because the baby needs it in your milk,” she explains.)

“Stacy is a true Earth mother and the second her daughter was born, she became her priority. She isn’t one of those stars desperate to get her body back. Because she has always taken care of herself from the inside out and likes to move,” Gleyzer adds, “It wasn’t difficult for her to get back into shape.”