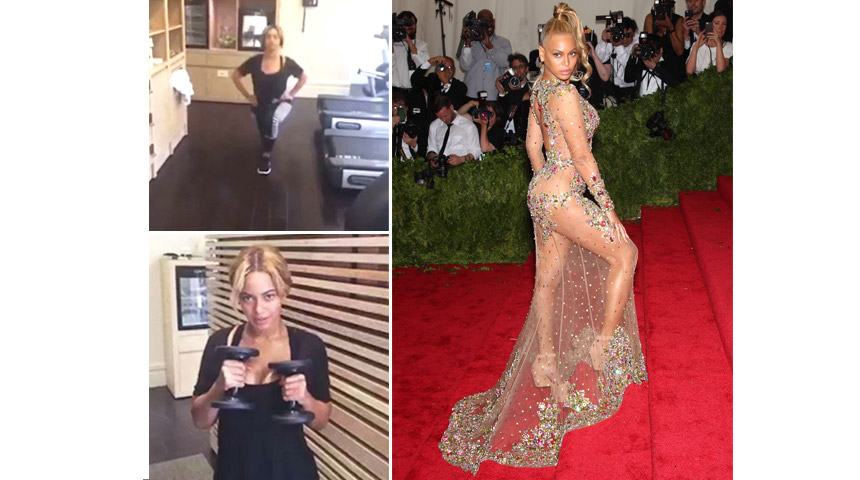 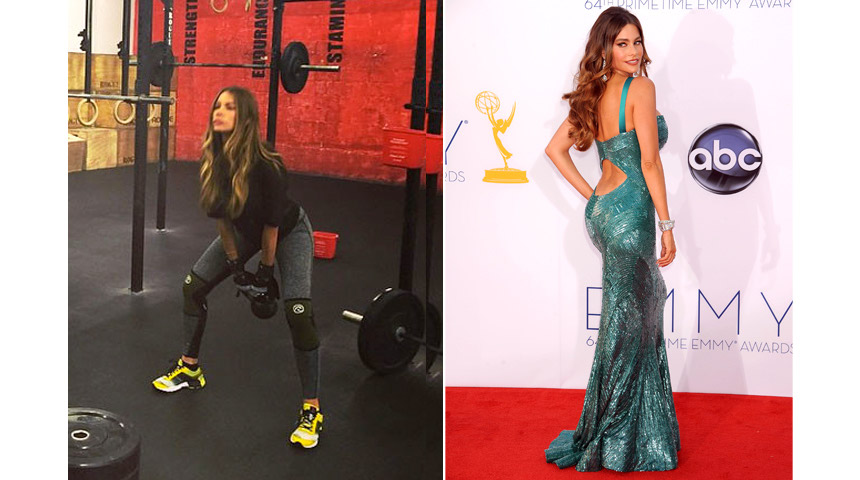 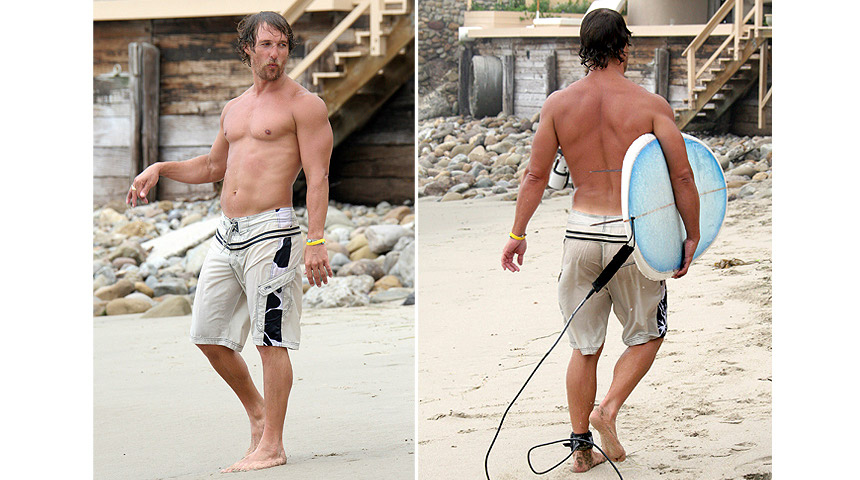 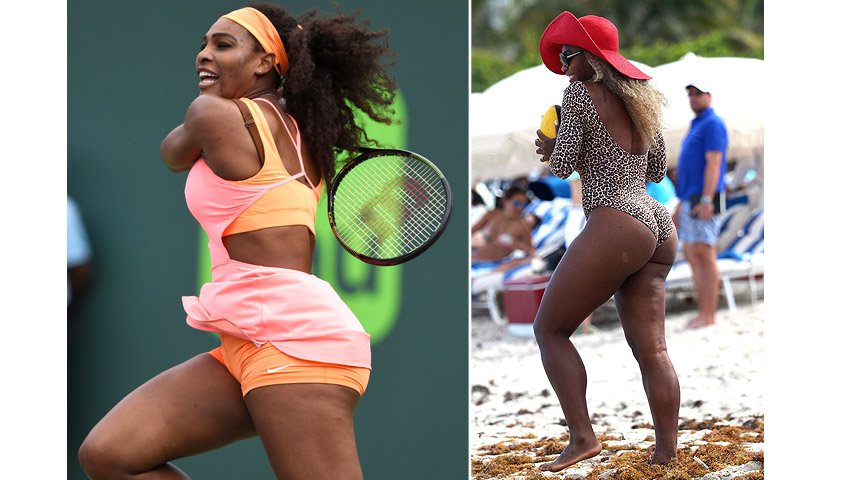 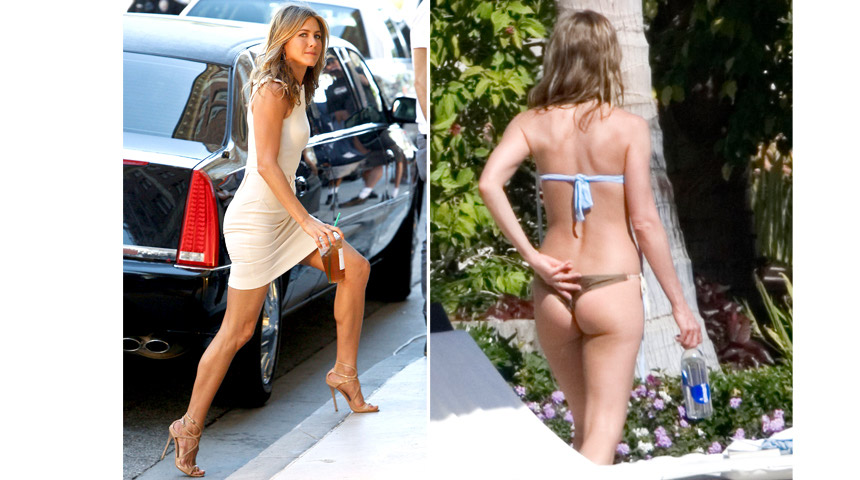 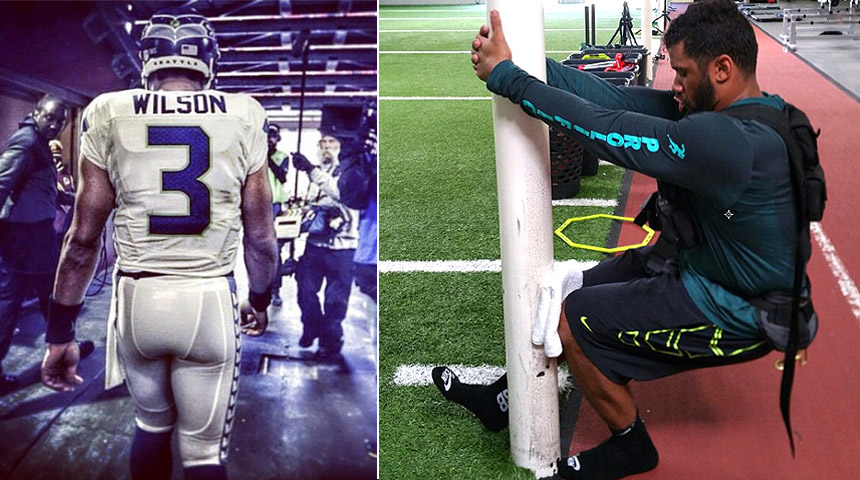 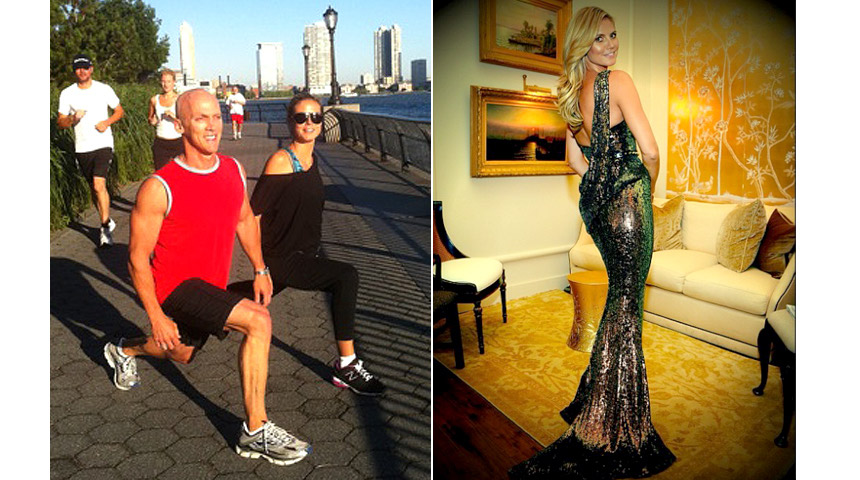 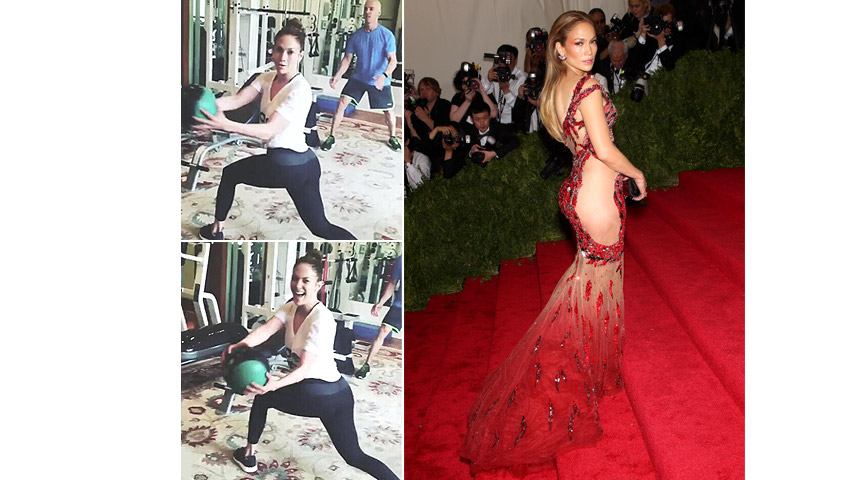 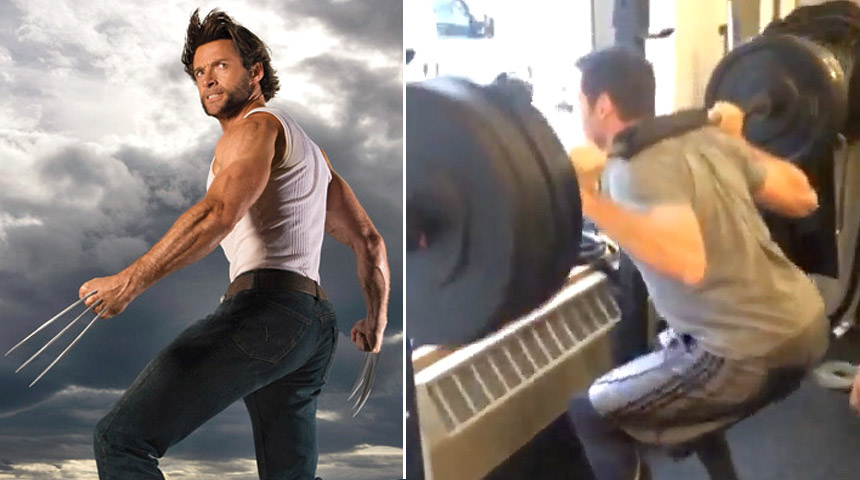 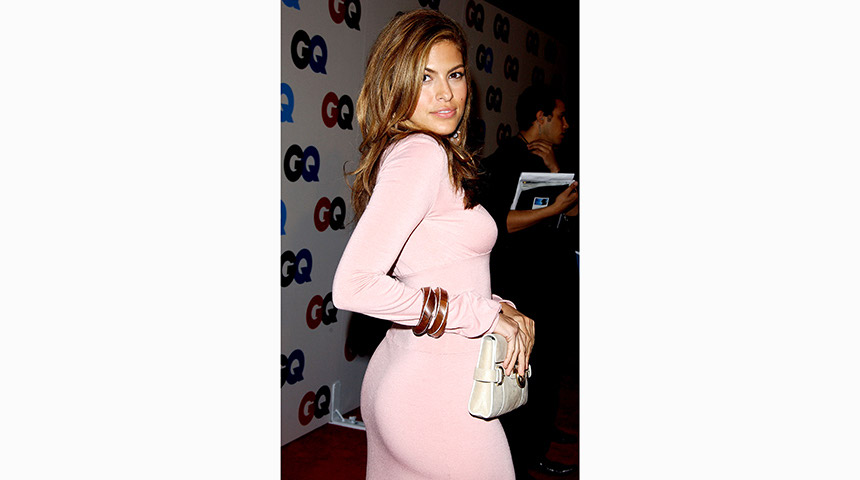 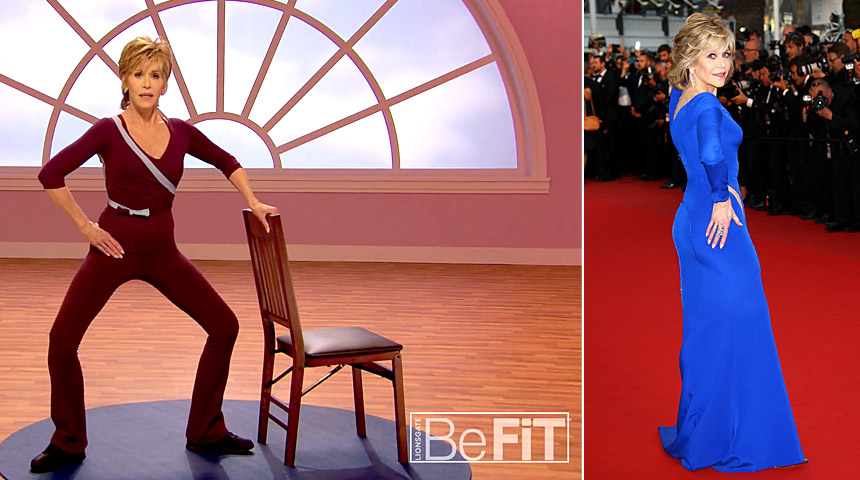 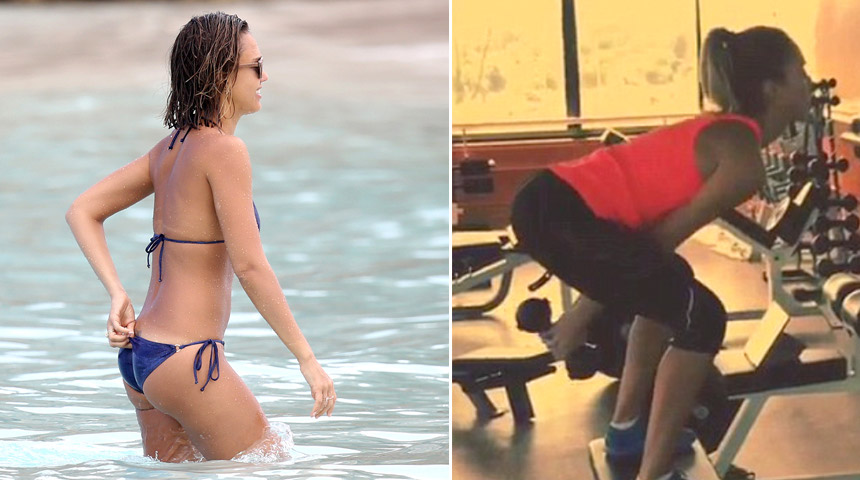 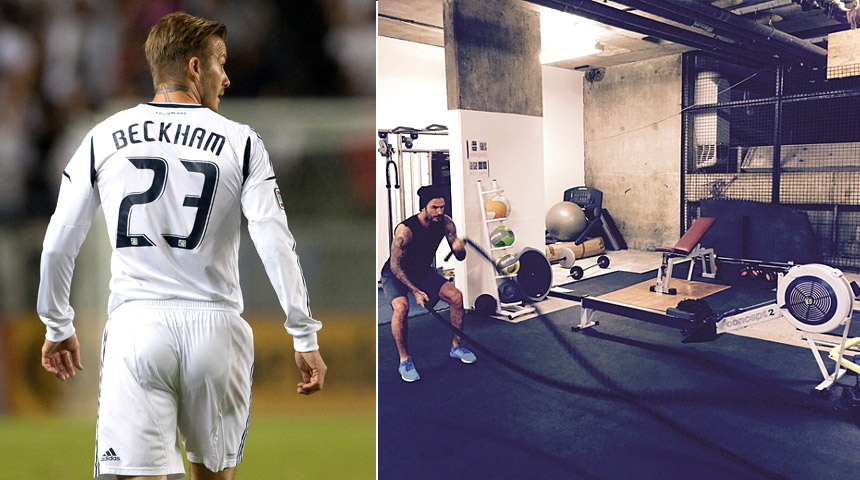 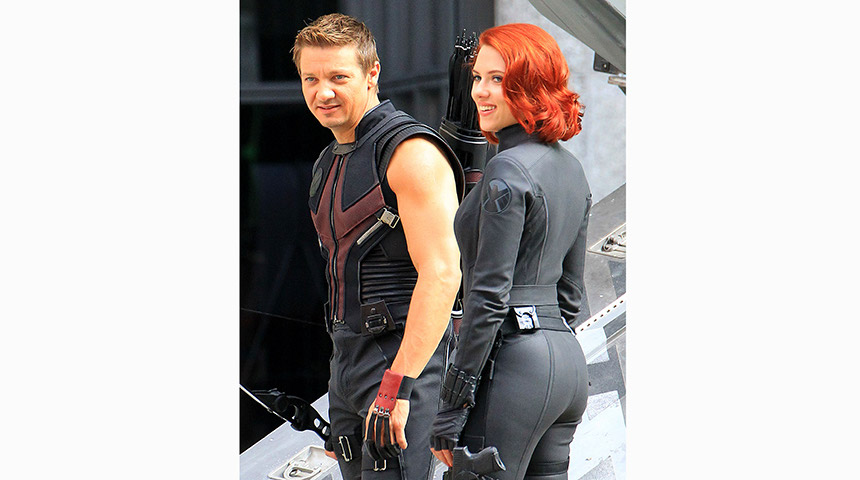 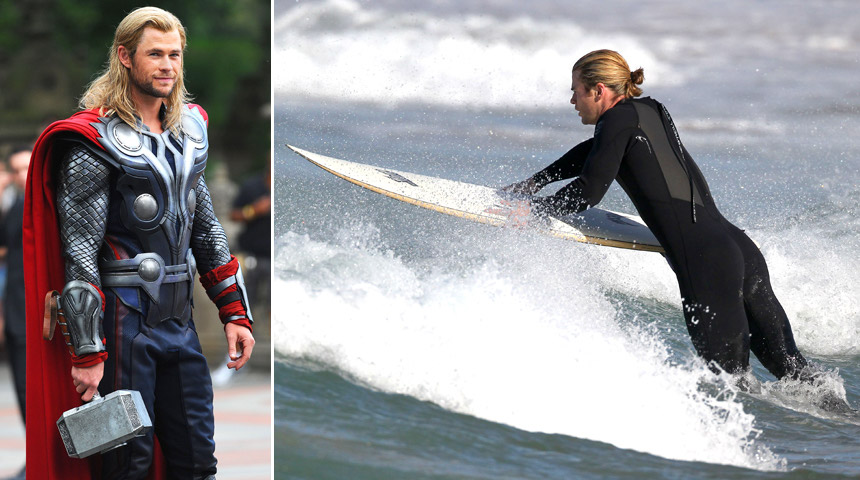 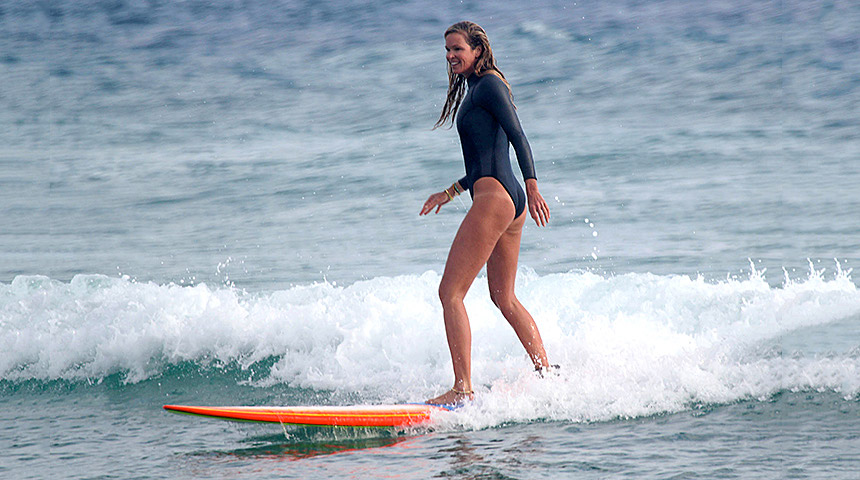 Beyoncé coined the term “Bootylicious,” so you can bet the superstar busts her butt to maintain her backside! Bey puts her body in the hands of exercise physiologist and LivingHealthy expert Marco Borges, who reveals to us the four moves that keep her looking fanny-tastic: skater lunges, prisoner squats, single-leg pelvic tilts and jumping lunges. Oh yeah, and there’s also her vegan diet. To execute a skater lunge, stand with your feet shoulder-width apart and step your left foot back behind your right, bending both knees into a lunge. With your left knee behind your right heel, press down into your right heel, bringing your left foot back into the starting position. Repeat on the other side.

It takes more than one type of workout to get Sofía Vergara’s beautiful backside ready for the cameras. The Colombian bombshell trains with Anna Kaiser as well as Pilates instructor and LivingHealthy expert Jennifer Yates. When we asked Yates how Sofía maintains her most talked-about body part, the Pasadena-based trainer confessed that it’s with the help of one of the simplest, most effective and brutal workout moves: “I believe Sofía has a love/hate relationship with squats!”

Matthew McConaughey can’t get through an interview without being asked about his phenomenal physique—which includes a perfectly chiseled posterior. However, you won’t find the Academy Award winner slaving away at the gym. Instead, McConaughey prefers his workouts al fresco with trainer Peter Park, powering through a variety of fat-blasting moves, including one-legged squats and kettlebell work. “He likes challenging, almost gymnastics-type stuff,” Park told Men’s Fitness.

“I’ve learned to love me,” Serena Williams recently admitted to Robin Roberts on Good Morning America. “I’ve been like this my whole life and I embrace me. I love how I look. I am a full woman and I’m strong and I’m powerful, and I’m beautiful at the same time,” says Williams, embracing her famous body and responding to those who have shamed her for it. “I don’t have time to be brought down; I’ve got too many things to do. I have Grand Slams to win, I have people to inspire and that’s what I’m here for.” While Williams’ impressive curves are obviously fine-tuned by hours and hours on the tennis court, she also mixes in cardio, like running, biking and elliptical machines, as well as dancing for some added burn.

She may be a bit older than some other gals on the big screen, but Jennifer Aniston has a booty that’s still one of the most desired in Hollywood. The newlywed is a dedicated client of yoga instructor and Yogalosophy creator Mandy Ingber, who claims that Jen’s perfectly shaped derriere is a product of yoga chair-pose squats. “We exhaust the bigger muscle groups with chair pose, then target the smaller muscles with squats. There’s nothing like a squat to lift the booty,” Ingber dished to Self.

Russell Wilson is a Super Bowl-winning quarterback, so it isn’t shocking he’s built like a superhero. However, the Seattle Seahawks star still has to do work off the field. Men’s Fitness revealed his grueling workout program, which includes this super-serious squat: “Set up in a squat rack or cage. Grasp the bar as far apart as is comfortable and step under it. Squeeze your shoulder blades together and nudge the bar out of the rack. Step back and stand with your feet shoulder-width apart and your toes turned slightly outward. Take a deep breath, push your hips back, then bend your knees to lower your body as far as you can without losing the arch in your lower back. Push your knees outward as you descend. To come back up, extend your hips, continuing to push your knees outward.”

Heidi Klum gets her supermodel booty from a workout move inspired by an Aussie animal! According to her trainer, David Kirsch, the gorgeous German keeps her booty bikini-ready with an exercise called the Platypus Walk: “Start in a plié squat position, with your hands behind your head and your thighs parallel to the ground,” Kirsch instructs. “Waddle forward, staying engaged in that plié squat. Now reverse. Make sure your knees stay out and your weight stays back in your heels throughout the movement.”

Jennifer Lopez, whose rear helped reshape American beauty ideals, recently started toning her tush with Tracy Anderson, who “tricks” the superstar’s muscles by changing up her workout every 10 workouts. However, it’s Gunnar Peterson who maintained her famous asset for over a decade. “If you want to enhance the shape of your butt, as well as tone and tighten, the most important exercises are squats and lunges,” Peterson told Shape. “Be sure to use weights, weights, weights, and weights… and then some weights!” The celebrity trainer also advises amping it up with moves like “twisting lunges and a variety of squats from different angles to target the butt muscles, obliques and lower body.”

Hugh Jackman doesn’t keep any secrets when it comes to how he maintains one of the most beautiful bootys in Hollywood. The Wolverine actor posted a video on his Instagram page back in 2014 in which he engaged in a seriously butt-busting squat with several hundred pounds of weight on his back. “Ass to the grass,” he cheekily captioned, referring to his workout.

Hot mama Eva Mendes keeps her curves sculpted with the help of Peak Performance Strength & Conditioning founder Joe Dowdell, who revealed to Fitness her most important butt-blasting workout move: the rotational step-up. “Stand with right side next to a step or stairs, placing right foot on step. Turn right foot 90 degrees, toes pointing to the right. Straighten right leg to stand up, turning hips so body now faces step. Place left foot on step. Return to starting position by stepping back with left foot. Do 12 to 15 reps on right leg; switch sides.”

It’s hard to believe that Jane Fonda is in her late 70s. The workout queen and Academy Award-winning actress is still flaunting her fabulous fanny on the red carpet. A few years back, Fonda revealed the simple secret workout moves to an age-defying derriere—which include stationary lunges and squats—on a YouTube series called BeFit.

Mother of two Jessica Alba works hard to keep her bottom looking perky, doing everything from “power yoga with light weights in a 105-degree room” with Omar Lopez to working with a trainer. Alba recently revealed to Shape that squat jumps are one of her go-to moves when she’s in a time crunch. With feet shoulder-width apart, get down into squat position, engage your core and jump up. As you land, as controlled as possible, make sure to end up back in squat position.

David Beckham definitely keeps his backside in shape by spending the majority of time kicking butt on the soccer field, but the handsome Brit also has a fetish for one of the trendiest booty-building workouts in town: SoulCycle.

Whose jaw didn’t drop when they got a glimpse of Scarlett Johansson in a catsuit in The Avengers? The actress busted her butt with trainer Bobby Strom to firm up her fanny for the unforgiving costume. During her 90-minute, high-intensity workouts, the star “lifted dumbbells and straight bars as well as worked with resistance bands, medicine balls, BOSU balls and TRX,” Strom reveals. “She also did Olympic-style lifting and platform jumping.” To execute the platform jump (also called a box jump), which is a great workout for your quadriceps, stand in front of a plyo box with feet directly under the hips and hands by your side. Lower yourself into the jumping position by bending at the knees and hips, keeping your head up and your back straight. Explosively jump from the crouched position while swinging the arms. Land softly on the center of the platform, absorbing the impact with your legs. Stand tall. Return to starting position by either jumping backward off the box or by stepping down. Repeat movements.

Chris Hemsworth, who has one of the most perfectly formed posteriors in the world (which he showed off in the buff in the movie Rush!), relies on old-school bodybuilding for his superhero body. To get in shape for the Thor franchise, Hemsworth trained with former Navy SEAL Duffy Gaver, and one of the moves they perfected was the walking lunge. This equipment-less workout can be done easily at home: Stand tall with your feet together. Take a large step forward with your right leg and drop into a lunge, bending both knees angled at 90 degrees. Keep your torso upright with your chest up and shoulders back, maintaining your balance. Step forward and bring your feet together. Take another step forward with your left leg and repeat.

At 51, Elle Macpherson is still rocking her nickname, “The Body,” with pride. The former supermodel—who gets her workouts via a mix of running, yoga, surfing, waterskiing, snow skiing and resistance training—trains with James Duigan, who claims she swears by a “tube knee” exercise, which “switches on your hip and thigh muscles and strengthens your core.” Put a band around your knees. Assume a squat position and bring one knee in toward the other 15 times. Try to keep the rest of your body still. Repeat with the other knee.

Though stars like Beyoncé, Sofía Vergara, Russell Wilson, Serena Williams, Chris Hemsworth and Jane Fonda were blessed with bootylicious bodies at birth, they don’t maintain their fantastic physiques by sitting on the couch eating Cheetos and watching Real Housewives reruns! Whether sprinting down the field, squatting at the gym, sweating the day away at SoulCycle or engaging in hard-core lunges al fresco, these singers, actors, athletes and models bust their butts to get their backsides as close to perfection as possible. LivingHealthy has chosen 16 controversy-free celebrity bootys (none of these stars have been accused of artificially plumping up their posteriors) and uncovered the butt-blasting workouts they undertake on a daily basis to earn their bootyful bodies.