The New Prime for Men Over 40

The Midlife Crisis. It’s when men in their 40s, 50s and 60s start buying fast cars, breaking up marriages, dating young women and acting like they’re trying to relive their 20s, when they were healthier and more energetic.

But Craig Cooper, founder of the CooperativeHealth and Performance Research Labs, which helps improve the health of middle-aged men, firmly believes it doesn’t have to be that way. In his new book, Your New Prime: 30 Days to Better Sex, Eternal Strength, and a Kick-Ass Life After 40

, he says most men in the 40-to-60 age bracket (including himself, at age 52) can live today at the peak of their physical, emotional and mental prowess provided they are “getting everything tuned up, trimmed down and running smoothly [to make] the middle years the best years yet.” 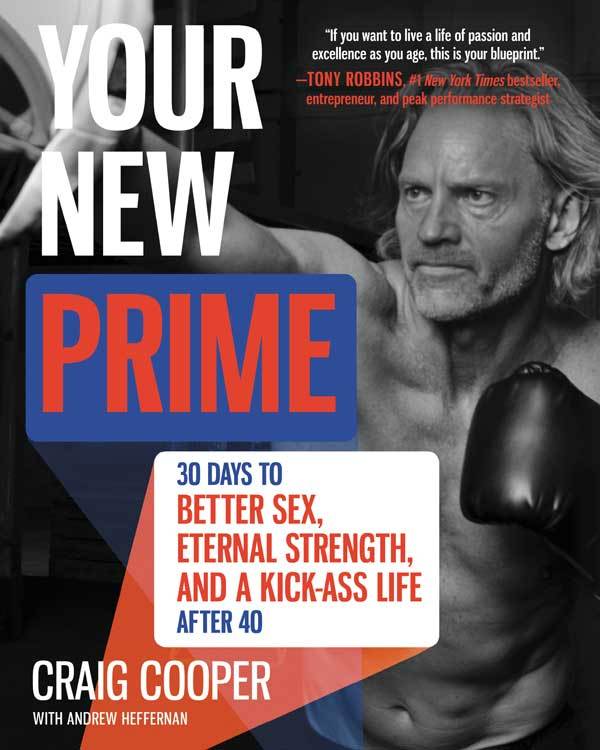 Cooper’s book guarantees “better sex, eternal strength and a kick-ass life” within 30 days if—and only if—the reader follows his step-by-step methods on how to eat, exercise, sleep and, most importantly, live better each and every day. The goal? “Being more concerned with playing with your kids than being able to bench-press 300 pounds, [and instead] focusing on functional strength and balance,” says Cooper, who adds that men in their 40s and 50s stay fit differently than their younger counterparts. “It’s harder for us to maintain muscle mass, so the core part of my program at this age is all about men getting more protein and doing more weights. We are never going to be on the cover of Men’s Fitness, but I can say this: I am in better shape than I ever was in my 20s. Ever.”

Cooper himself has not always been a specimen of good health. In fact, for most of his early life, it was just the opposite. “I have a genetic risk for prostate cancer,” says Cooper, who has prostatic intraepithelial neoplasia (PIN), in which prostate cells appear abnormal under a microscope. The Harvard Medical School states that PIN is diagnosed in as many as 16 percent of all male prostate biopsies, and Cooper says his particular type of PIN gives him a 40 percent risk of prostate cancer. “I advocate early stage PSA [prostate-specific antigen] testing because it gives [you] a dashboard to what is going on,” he explains.

But that’s just the start of Cooper’s past medical conditions. At 9 years old, he had encephalitis, a type of inflammation of the brain. At 11, he had a bone infection called osteomyelitis. And when he was almost 18, he underwent heart surgery due to an infection in his heart tissue. He had also tested positive for a genetic risk for Type 2 diabetes, which he has kept at bay with diet, lifestyle and exercise. In his book, Cooper explains all these illnesses occurred because of his predisposition to viral inflammatory disease. He vowed to himself, “Regardless of the lousy genetic hand I’d been dealt, none of my health challenges were going to sideline me. I was going to do everything that I could to sideline them.”

Cooper highlights that exercise and nutrition are the critical building blocks for men to not only ward off disease, but also to defeat it. But there is another critical—but often overlooked—third pillar of a man’s health: testosterone. “We have less testosterone than our fathers did 40 years ago,” says Cooper, who believes this decline is causing chronic disorders. Cooper is right: According to the Endocrine Society, 50-year-old men in 1988 had higher testosterone concentrations than did 50-year-old men in 1996. Not only that, but testosterone, of course, is important for a healthy sex life. “Sex is at the core of our masculinity… [and] maintaining your plumbing is a key part of my book,” he says.

In the end, Cooper says, the greatest gift that middle-aged men can give to each other in order to achieve is each other. He strongly believes that men need to get back to spending time with other men, achieved by “seeking out new tribes.” For Cooper, who lives in Newport Beach, Calif., his primary male tribe happens on the beach, surfing with his buddies, who include professional surfer Laird Hamilton. “We don’t have the male communities we once did,” says Cooper, who adds that a whopping 80 percent of men say they don’t have anyone to talk to, which is driving depression and, in some instances, suicide. “We are just not connecting, and that has to change immediately in order for men to successfully reconnect to their bodies and nature and become the true embodiment of what it means to live a ‘new prime life.’”