The Obesity Rate Remains as High as Ever

According to new government data, obesity rates throughout the country are still not decreasing. A report conducted by Trust for America's Health and the Robert Wood Johnson Foundation concluded that the obesity rate in every U.S. state is no lower than 21 percent, with 22 states having a more than a 30 percent obesity rate. To compare, no state had an obesity rate higher than 15 percent in 1980. "The obesity epidemic is one of the nation's most serious health crises," said Jeff Levi, executive director of Trust for America's Health, a nonprofit health advocacy organization based in Washington D.C. 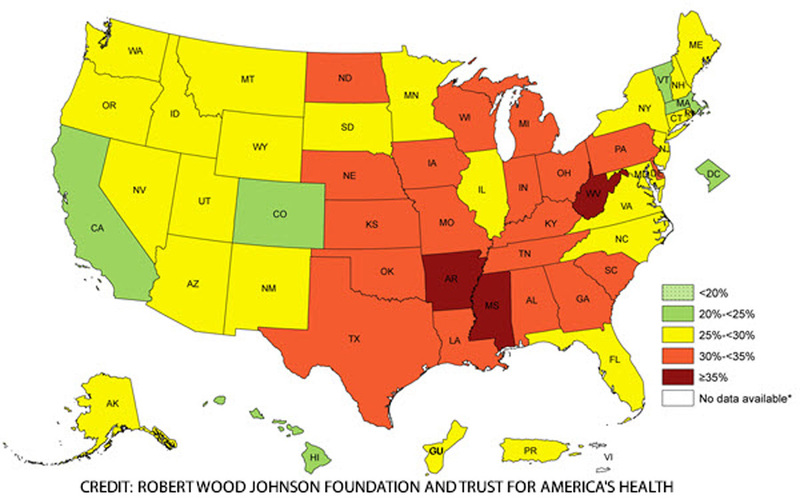 Arkansas, Mississippi and West Virginia had the highest obesity rates (more than 35 percent) while Colorado had the lowest (21 percent). Rates for most of the country didn’t get worse, but five states saw a slight increase: Kansas, Minnesota, New Mexico, Ohio and Utah. The report also shows that more than 30 percent of adults and nearly 17 percent of 2- to 19-year-olds are obese, with 78 million Americans at risk for a variety of obesity-related health issues including heart disease, type 2 diabetes and cancer.

We live in a “here and now” society where it’s easier to eat unhealthy, but improving your overall well-being is just a two-step approach. Having a nutrition program filled with fruits, vegetables and lean meats (e.g. chicken breast) instead of things like chips, cookies and red meat is key. Adding a daily exercise regimen is also important. And if you have a family history of obesity, studies have shown that individuals can still determine their own health. What do you do to support your health and well-being every day?